As we approach its 111th birthday, we thought it would be a great idea to introduce the wonderful Witches Falls National Park, right next door to our cottages on Tamborine Mountain.

Proclaimed on the 28th of March 1908, it is the oldest national park in Queensland, and the third-oldest in the world, established decades before environmental conservation entered the mainstream consciousness. Why not see what all the fuss was, and still is, about?

What to Expect at Witches Falls National Park 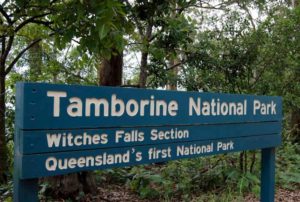 The park has two moderate-grade walking tracks, Witches Falls Circuit and Witches Chase Track; both are approximately one hour’s walk. The subtropical rainforest is filled with palm trees, banksias, strangler figs, red cedars and many other native species, a must-see for botany enthusiasts especially if you’re coming from abroad.

Witches Falls Circuit can be accessed by the car park off Main Western Road. Its southern start first descends down the steep mountainside through open forest, and eventually evens out into a stretch of seasonal lagoons (there is a wet weather track to ensure access at any time).

The northern entry begins on flat ground running behind the cemetery, and then zigzags into the valley through medium-density rainforest. Around halfway is a magnificent strangler fig tree, thought to be over 400 years old and 10 metres in diameter. The sheer size of the tree and its sprawling buttress roots, originating from the aerial roots young fig trees grow to maximise nutrient intake, are like something out of a fantasy film.

Witches Falls themselves are a couple of hundred metres to the right, using part of the Witches Chase Track. Breathtaking views of the Falls and rainforest will greet you on the viewing platform that unites both tracks.

Witches Chase Track continues on from the waterfall, through a rainforest and boulder field that gives walkers a more challenging, uneven terrain. Piccabeen palm groves, subtropical rainforest and amazing formations of tree roots interwoven with boulders await you here, not to mention a sense of accomplishment if you are new to rocky tracks.

At the end of the boulder field, either turn around and walk back the way you came or arrange to be picked up at the Witches Chase car park, accessible by continuing on the track and upstairs. 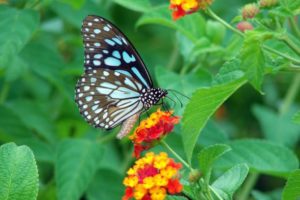 The native animals you can see depend on the time of year that you visit, as well as the time of day. Shy pademelons are most likely to be seen in the early morning and late afternoon; in case you haven’t heard of them, they are tiny (and very cute) wallabies that mostly live in rainforests.

Perhaps the most beautiful Australian native animal you can find at Witches Falls is the lyrebird, with both species being favourites among birdwatchers. The superb lyrebird has larger, more spectacular feathers, and is found from southeast Queensland to southern Victoria. The Albert’s lyrebird has a smaller but still beautiful tail, and is only found in southeast Queensland and northeast New South Wales.

It is only the male that shows off its fan-like tail, while the females look similar to pheasants. You’ll probably hear it before you see it, mixing its own calls with rosellas, whipbirds and many more. Occasionally, lyrebirds are found mimicking songs and other human noises such as car engines!

If you encounter a lyrebird with an unusual repertoire, send a recording our way!

Australia is known worldwide for its unique environment and wildlife, and Tamborine Mountain is no exception.

At nearby Witches Falls Cottages, hosts Daniela & David love where they live, and love sharing it with their guests.

Click here if you would like to experience for yourself a stay in Witches Falls Cottages just across the road from Witches Falls National Park.

If you have any questions at all please click on this page.